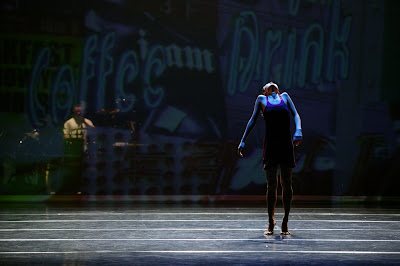 Weeks have flown by, one busy 12 or 16 hour day into the next, it’s hard to know the day of the week, let alone the date. Final rehearsals of both pieces, a press review and first performances are behind us. The theatres are magnificient: modern, new, huge, well-equipped and the dancers and the work looks fantastic on them. Both performances at the Arko Theatre for the Seoul Performing Arts Festival were well attended and the show has been well received. About 400+ people each night at Arco. We met a Korean dance critic who was also a dance history professor; his private collection of some 70,000 recordings that he has made of pieces he has seen is probably the world’s largest private dance archive. Now we are part of it. We are writing this en route to our technical rehearsal for tonight’s performance at Goyang’s Saerasae Digital Theatre. Moments of stillness are few. When we commented to Mr. Choi, the NOW Dance Company lighting designer, that we will have 3 busy days ahead his reply, “ Not busy, it’s the Korean way”. 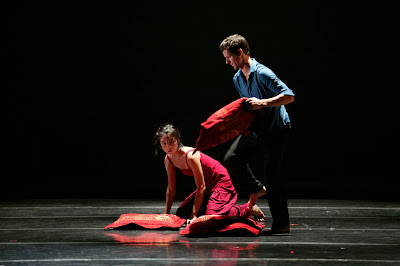 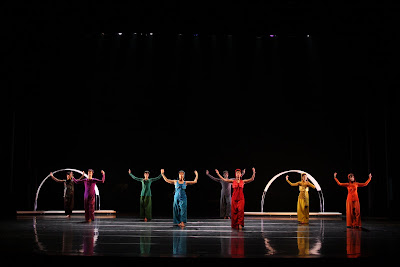 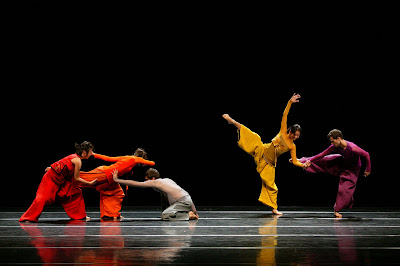 Posted by Robert Connor and Loretta Yurick at 1:37 PM No comments: 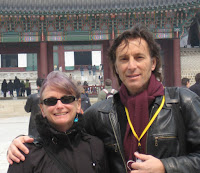 Welcome. This is an adventure for us; a blog to keep our friends, family, fans, and colleagues abreast of this exciting co-production. Because this project has been taking place for several months already and will go on for several more, we wanted to find a way to make some of the creation and cultural aspects of the project more visible; to speak a bit about the experience of Korea, especially, and to share images not only of the work, but the daily life we inhabit here in Seoul, because it is quite a contrast to our surroundings in Ireland. And there are similarities to be found as well, in the people, the culture and connections.

In upcoming posts we will talk more about our reflections and motivations behind the creation of Parallel Horizons / Under the Roof and our impressions of Seoul, but as kick-off we will share just a bit about the early part of the project's journey and a first outing here. (To read more about the production and tour details, please see the archived posts of 19 and 21 August.)

This project began in August 2007 when we were performing at the Busan International Beach Dance Festival, and were invited by the choreographer Director of NOW Dance Company, In-Young Sohn, to make a co-production. A year of planning ensued, the how, when and where worked out through hundreds of emails across space and time, to finally "give birth" to this project. 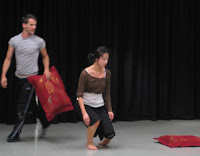 Starting on the 1st of June, In-Young Sohn and her 4 dancers were in residence with Dance Theatre of Ireland in Dun Laoghaire for 6 weeks. In that time we created Parallel Horizons with the combined group of 8 dancers. It was an adventure in communication, in getting to know the temperaments and talents of each Korean dancer and how the chemistry of this group would take off. We wanted to capture and convey the sense of the East meeting West, ancient and modern, timelessness versus lack of time. We created moments of presence and poetic gesture and contrasted this with a fast paced flow of group energy, with quick and risky duets and ensemble work where individuals, couples and quartets appear and recede. In the final two weeks the Korean and Irish musicians joined us and the studio truly became a “creating space” with dance rehearsals from 10-6 and music rehearsals going on till 11pm or later. By 12 July we had completed the final draft of the piece; dance, music and costumes and digital imagery. Sounds simple? It was a lot of work!

In the same period In-Young made a start on her piece Under the Roof, incubating ideas and setting movement that would be revisited in her August rehearsals. 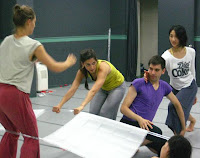 On 17 August, the dancers from Dance Theatre of Ireland arrived in Seoul to continue creating the co-production with NOW Dance Company in their home studio. The same group of dancers are together again, no need to “break the ice” and each day with In-Young’s direction they go further with the ideas started in Dun Laoghaire. In-Young is using some props as well, and it takes time to work out how to manipulate them and create structures with them. A strong emphasis on the breath permeates her work, and each day’s practice includes a slow medatative sequence that counterpoints the high energy moments in the piece. 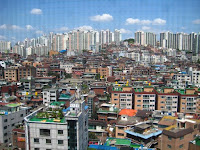 The biggest contrast that strikes us is the sheer size of Seoul, with over 10 million inhabitants. The city stretches for miles, as far as one can see in any direction. High rise building is the norm, with many 15-20 story apartment buildings clustered in groups of 10 or more. At street level it is all go, traffic 24/7 and many shops, restaurants, markets seemingly are on that same time scale. Nestled within the maze of high buildings you also have street vendors selling fruit and vegetables, fish, meat, clothing and more. Korean food comes in many forms and is everywhere to be found. This mix of modern structures and traditional markets is distinctive, as are the odours and aromas that meet you as you walk through them. It took a week to get used to the pervasive smell of fermented cabbage, the ubiquitous Kim Chi.

But the antidote to this urban scene is the mountain parks that give one perspective on the megalopolis that is Seoul. Built within a surround of mountains, Seoul spreads itself beneath forested peaks that served as its protection in times past. Now they are the recreational parks for its people. 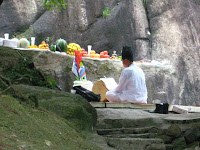 Inwangsan is an urban park to the northwest of the city centre, reachable by subway. This hillside walk is famous for Shamanistic shrines that are tucked away, shaded by the lush forest. Shamanist ceremonies are carried out here still, and in fact we came across several underway. Chanting, drumming, fruit, wine, soju (Korean rice poteen), in one ceremony a whole pig; offerings are made to the dead, in the belief that they still need food and drink. When we told In-Young what we had seen, she said "This is very special, it does not happen all the time."

Ever the Capricorns, we seek the higher ground and climb we did…to the peak of Inwangsan. The trail follows part of the ancient Seoul fortress wall, and steep steps culminate at the 338 metre summit, where there is a view in all directions, and the immensity of Seoul is evident. But here it is quiet, the air is fresh and Monarch and Swallowtail butterflies grace the surrounding shrubs.

On the descent the trail took us through an ancient village, Buddhist temples perched on the hillside. Not just relics, there were lighted candles and drumming within as the sun settled toward evening. We were just 20 minutes walk away from the subway stop and traffic, yet you know this site carries the echoes of thousands of years of visitors and the spirits sheltered here.
Posted by Robert Connor and Loretta Yurick at 8:12 AM No comments: 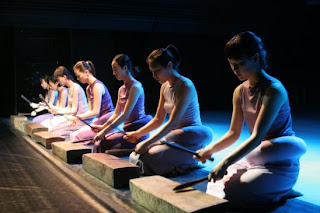 Posted by Robert Connor and Loretta Yurick at 5:21 PM No comments:

Parallel Horizons / Under The Roof 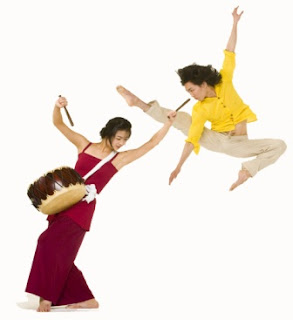 Dance Theatre of Ireland are delighted to present a very special co-production with the NOW Dance Company Korea; joining their Companies - Dancers and Musicians - in a double–bill of new work that will premiere in Seoul and tour in Ireland & Korea in Autumn 2008. This ambitious collaboration is the first of its kind between Ireland and Korea, and coincides with the 25th anniversary of Diplomatic Relations between the two countries.

The 2 Companies will be in residencies (in Ireland and in Korea) creating two new works throughout Spring & Summer 2008. Bringing together dancers (4 from each Company) and Musicians (2 from each Country), the programme will be performed by a combined ensemble of 12 members -- 8 Dancers and 4 Musicians/drummers, with the original music performed live.

Featuring the choreography of In Young Sohn, Artistic Director of the Korean NOW Dance Company and Robert Connor & Loretta Yurick, Artistic Directors of Dance Theatre of Ireland this work will premiere for the Seoul Performing Arts Festival in September 2008, followed by a tour in Korea, with performances in Ireland in November. This very special project unites the three choreographers (each in their own way) in the exploration of themes which reflect on our shared (and unique) experiences: family, home, identity, separation, change: facets of contemporary living influenced by the nuance of tradition. Visually arresting, the works permeate the senses with an intelligent thoughtfulness that playfully and skilfully tells us more about ourselves.
This very special co-production is generously supported by the Arts Council & Culture Ireland.

Posted by Robert Connor and Loretta Yurick at 2:37 AM 1 comment:

** The Seoul Performing Arts Festival is one of South Korea’s most prestigious dance & theatre events.